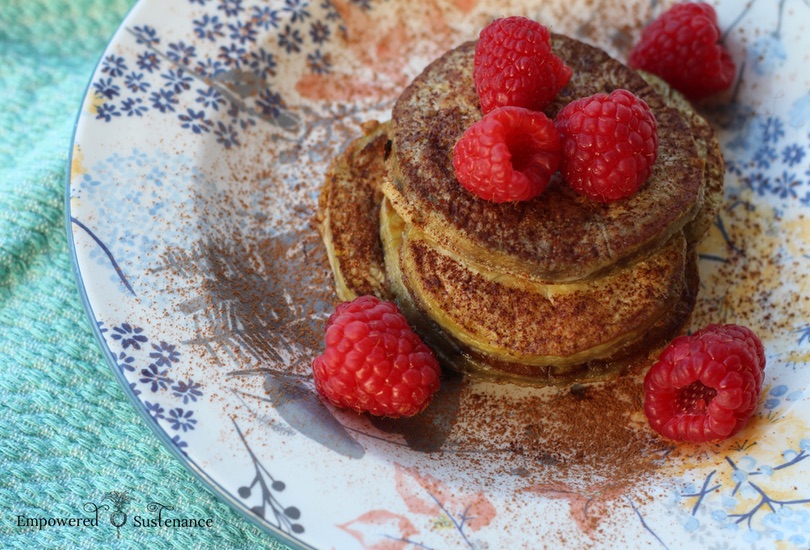 I’m no stranger to sneaky ingredients…

I’ve made grain-free “oatmeal” with coconut, and I’ve used parsnips instead of rice in risotto. I’ve replaced the cream in ice cream with avocado, and used avocado in cream pie as well. I’ve even replaced the flour in tortillas with cauliflower.

But, when it comes to starring an unusual ingredient, this recipe supersedes them all. Because this paleo french toast uses eggplant slices rather than bread slices!

Stay with me here, let me quickly explain myself. First, if you’re searching for a Paleo French Toast recipe, you’ll find options made with various paleo breads. This presents the time-consuming step of making the bread. Further, paleo breads featuring flours such as arrowroot, tapioca and cassava  carry a heavy carbohydrate hit, especially when paired with a sweet topping such as maple syrup. I don’t advocate a carb-heavy breakfast, as it can create a pattern of blood sugar spikes during the rest of the day. (See my post on blood sugar for more details). And finally, many paleo breads feature almond flour, which, while low-carb, is definitely not my flour of choice.

This low-glycemic eggplant French Toast offers a texture very similar to bread-based French Toast, and it supremely simple to prepare!

Eggs –  This recipe absolutely needs real eggs. If you read the comments on my site, you’ll discover that every. single. recipe. has a comment asking, “Can I use an egg substitute?” I offer many recipes formulated to be egg free, because many of my recipes containing eggs don’t work with substitutes.

I can reassure you that this paleo French Toast won’t have you thinking you’re eating moussaka or baba ganoush for breakfast. Eggplant, particularly when salted and rinsed prior to use, doesn’t offer a distinctive flavor. This resulting French Toast, however, doesn’t have the sweet, buttery flavor you’ll get from bread. I recommend adding flavorful toppings to make up for this. Consider dusting cinnamon or pumpkin pie spice, and spreading on apple butter, coconut butter, or nut butter.

Print
*No Bread* Paleo French Toast Recipe
Serves: Makes about 10 small slices, for 2 servings
This paleo french toast recipe requires only six ingredients. The secret to this bread free recipe? Eggplant! When cooked in an egg batter, it takes on the texture of french toast without a discernible flavor.
Ingredients
Instructions
3.5.3226 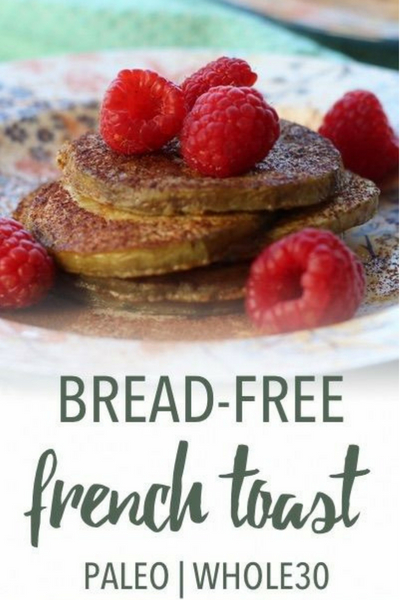