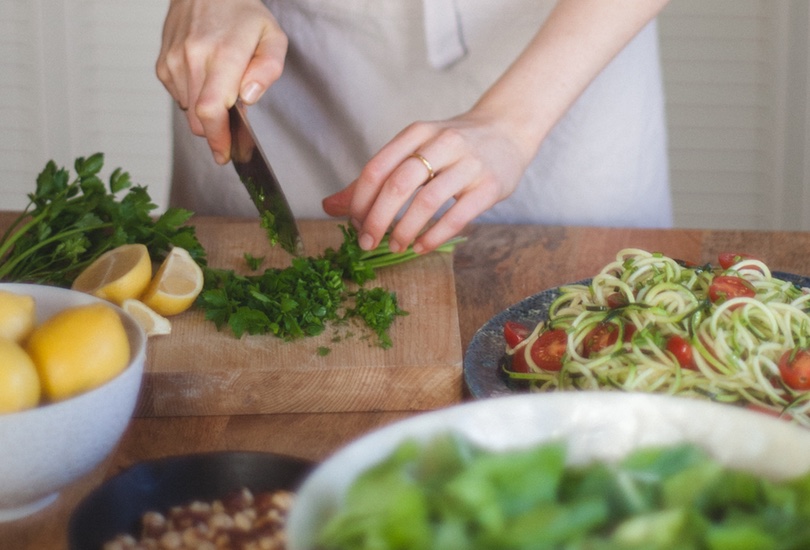 WARNING: Long post ahead… I won’t be offended if you skim it. But if you want to understand my experience of keto, and avoid misinterpreting sections here, you’ll need to read the whole thing.

I tried the ketogenic diet for 2 1/2 months. I was a hot mess. If you watched my Instagram stories during this process, you were witness to glimpses of said hot mess.

What is the ketogenic diet?

In a ketogenic state, the body obtains energy by burning fat rather than sugar. Ketones are a form of fat which the body can use as fuel.

On keto, the body becomes fat-adapted. In a non-ketogenic state, the body is a sugar-burner, using blood sugar (glucose) for fuel.

Both states are normal to the human body, although many people live without experiencing a state of ketosis. In traditional hunter-gatherer lifestyles, people regularly cycled in and out of ketosis. Most of these cultures lacked consistent access to carbohydrates. In seasons where carbs were unavailable, or when food was very scarce, blood sugar levels would plummet.

As a result, the evolutionary mechanism of ketosis kicked in. The body would convert stored body fat into ketones, providing energy even in the total absence of food.

The ketogenic diet and spiritual traditions

All all major religious traditions include prolonged periods of fasting. Fasting puts the body into a ketogenic state. When we aren’t consuming carbohydrates, the body converts stored body fat into ketones to burn as fuel.

A ketogenic state can change consciousness and elevate intuition, hence its place in spiritual work. It offers profound potential to shift one’s nervous system, and alleviate chronic anxiety, and is also used to bring balance in psychological disorders like autism. It is one way, but not the only way, to experience heightened clarity of the body’s wisdom.

Is the ketogenic diet natural?

The ketogenic diet strives to mimic a state natural to the human body by unnatural means. The use of MCT oil, exogenous ketones, erythritol, ketone monitors, and macronutrient tracking is high-tech and synthetic, not natural.

Is this the wrong approach? Not necessarily.

I believe the goal of any diet or healing protocol is to re-align the body to its own nature.  In an environment of pollution, chemicals, and synthetic food, the body’s nature is corrupted.

Our body is constructed from what we consume. When we consume pesticides and refined sugar, these elements are incorporated into the body. The body cannot function when made these ingredients, and as a result, disease occurs.

We need to guide the body back to its nature, and this may require some unnatural interventions. For example, I used a healing protocol called The GAPS diet to recover from an extreme autoimmune disease.

I followed specific rules about what foods to eat, which wasn’t necessarily natural. I ate copious amounts of coconut oil even though I I didn’t live near a coconut tree. And I took supplements that were made in a laboratory.

The ketogenic diet often makes a math equation of health. It emphasizes laboratory-produced foods,  scientific research, and careful measurements. I believe this approach should serve as means to an end, and not ultimately a way to live.

We can use our mind (science) to help re-align the body to health. But once the body is in balance, it’s time for the mind to get out of the way. 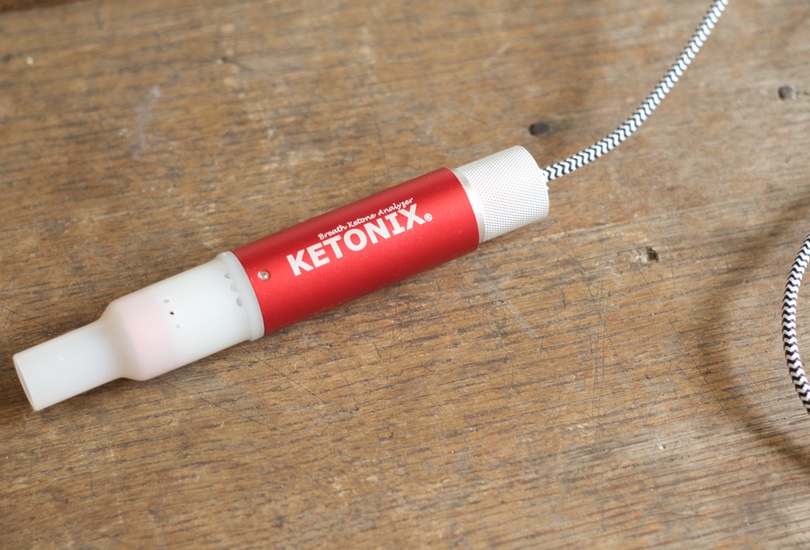 Why I did the ketogenic diet

I decided to do keto so I could experience what I’d been hearing about. Would ketosis be the solution to my elevated blood sugar? Would it completely calm my anxiety? Would it give me more energy and mental clarity?

I understood its therapeutic potential for addressing weight loss, diabetes, and psychological disorders as well. However, before recommending the diet, I wanted to speak about it from first-hand experience.

My keto experience in 12 words:

I kept feeling tired, maybe I got calmer, and I gained weight.

During the first week, when I could barely get off the couch, I thought, “This is just the transition period.”  When the second and third week rolled around, moving my body felt like wading through mud. My thought processes felt similarly slow and heavy.

At the end of the first month, I longed for the physical strength I used to feel. A highlight of my life is regular ballet and yoga classes, where I feel joy and music flowing through my body.

I did notice a shift in my nervous system. The first few weeks, I felt as cranky as if I were going through perpetual PMS. Then, my moods evened out. Having struggled with anxiety my whole life, I felt an unusual sense of even-keeled calmness.

However, I’ve since wondered if this was a decrease in anxiety or the result of the profound mental lethargy.

When I stopped keto, the extra weight came off effortlessly. After a few weeks, my full energy returned. It felt like my body and soul had been longing for access to my energy.

The changes I experienced on the ketogenic diet

During keto, I felt bad… but perhaps I felt bad for some good reasons. Let me explain.

Blood work, done six weeks into the process, showed that:

Additionally, muscle testing showed that my body was detoxing mercury. I do not have mercury fillings, but high levels of mercury may be stored in my body since birth because my mom had amalgams.

So, the intense fatigue I felt could be attributed to any of the following:

1. Increased immune function — Keto may have supported my immune system in fighting chronic infections. These infections, which afflict almost every 21st century human, include parasites, fungi, and bacteria.

Imagine the fatigue you feel when sick with the flu. The body is doing the energy-intensive work of fighting bugs, and it leaves you exhausted. Similarly, the immune system uses a large bandwidth of energy to fight chronic infections.

2. Mercury detox — Over the last year, I’ve worked towards slowly mobilizing the mercury in my body though cilantro and chlorella supplementation. These are two food-based supplements that help release and remove mercury from the body.

Even with this gentle approach, the detox causes my moods to go haywire and my skin to breakout. It also leads to fatigue. So if mercury was moving through my system on keto, it’s no wonder I felt unpleasant.

3. Reduced thyroid function — Impaired thyroid function seems to be the most common complaint among women who do keto. According to Chris Kresser’s site https://chriskresser.com/is-a-low-carb-diet-ruining-your-health/  we require insulin to convert thyroid hormone T4 into the active form of T3. If insulin plummets, thyroid function can decrease.

But it’s a catch-22. When we are insulin-resistant as I was (even though I ate a pristine, low-glycemic diet), that also impairs thyroid function. Insulin resistance means inadequate glucose enters thyroid cells, diminishing cellular function. The ketogenic diet is one of the few tools to reverse the cycle of insulin resistance.

It could also simply be the case that keto doesn’t work for me. That would also explain things. 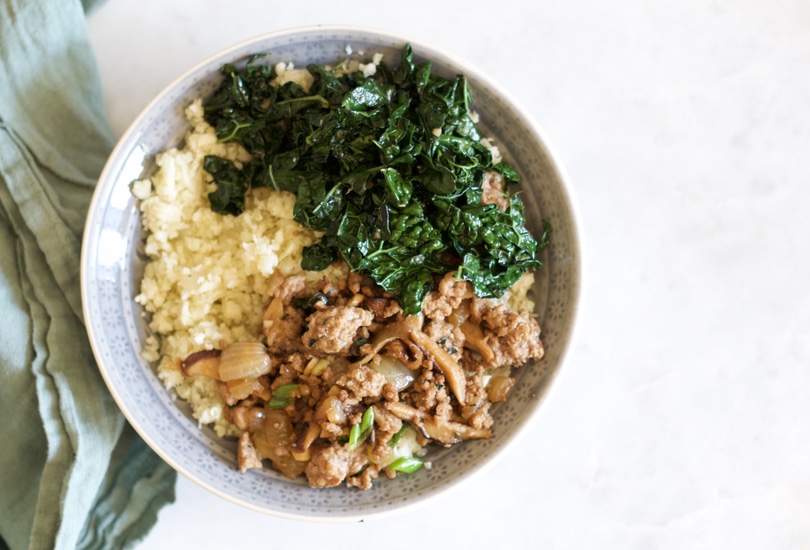 On keto, I did a lot of meat-and-veggie bowls, like this Cauliflower Rice Buddha Bowl

How I did the ketogenic diet “wrong”

What is typically recommended: Count your macronutrient intake using a calculator or app. Knowing the exact percentages of what you consume allow you to tweak the diet for success.

What I did: I didn’t count grams or calories, but rather estimated well. I have a history of anorexia, so there’s no way in hell I was going to start counting calories again. I didn’t want to trigger my dormant brain pathways for obsessive, exacting analysis about calories. I used a Ketonix breath analyzer or a blood meter (this one is recommended) to measure my ketone levels.

What I did: I used MCT oil, but my fatigue didn’t seem to shift. I avoided exogenous ketones because they had a synthetic state, and needed to be flavored and sweetened heavily with stevia.

What is typically recommended: Use highly-processed sugar-free sweeteners like stevia, erythritol, and xylitol.

What I did: I avoid sugar-free sweeteners, even the “natural” options like stevia. Sugar addiction is sweetness addiction. Years ago, when I quit sugar, I transferred my sugar cravings to stevia-sweetened desserts.

For more information, please read my post Is Stevia Healthy or Addictive? Sugar free sweeteners, without consequences, are too good to be true.

What is typically recommended: Cycle carbs. (There is no exact definition of how often or how much.)

What I did: I believed I erred on the side of caution by not cycling carbs. I was also concerned to throw myself out of ketosis for too long, and go through the initial transition period again.

Later on, I learned that cycling carbs is widely recommended. By this time I was ready to quit. So when I ate carbs and felt so great, I took it as a sign to ditch keto.  (A misinterpreted sign? Perhaps, I don’t know.)

What is typically recommended: Take plenty of salt to ensure electrolyte balance. The body loses a lot of water weight during ketosis, which often depletes electrolytes.

What I did: I did frequent muscle testing to determine which specific minerals my body required. Sometimes it was calcium, sometimes magnesium, sometimes potassium.

What I did: It kept feeling bad, so I stopped.

I am not suggesting the healing journey should be easy. Healing requires strength, determination, courage and independence. It’s also critical to be compassionate and tender toward your body.

I ask myself, “If this body was not mine, but the body of someone I love dearly, how much discomfort would I ask them ot endure for the sake of healing?”

Our culture encourages us to do more, and do it harder. Yet when it comes to healing, we need to know when to do less, and do it slower. 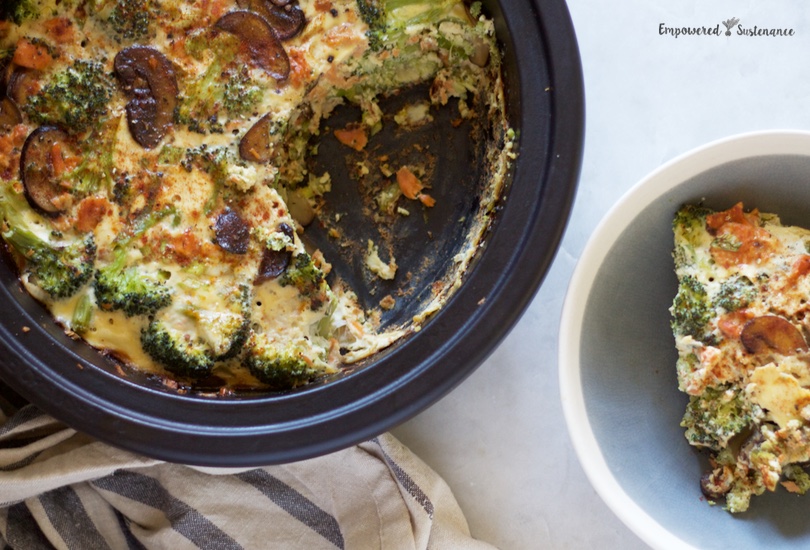 My Paleo Casserole was one of the best recipes I created while on keto.

Do I recommend the ketogenic diet?

Unless you try keto, you won’t know if it will work for you.  Two of my friends currently (women in their 20’s and 30’s) started keto when I did. For them, the results were positive. They lost weight, their skin is absolutely glowing, and they’ve integrated keto into their lifestyles.

Will I ever try keto again? I don’t think so. Now, I’m enjoying my energy, mental clarify, and carbs. 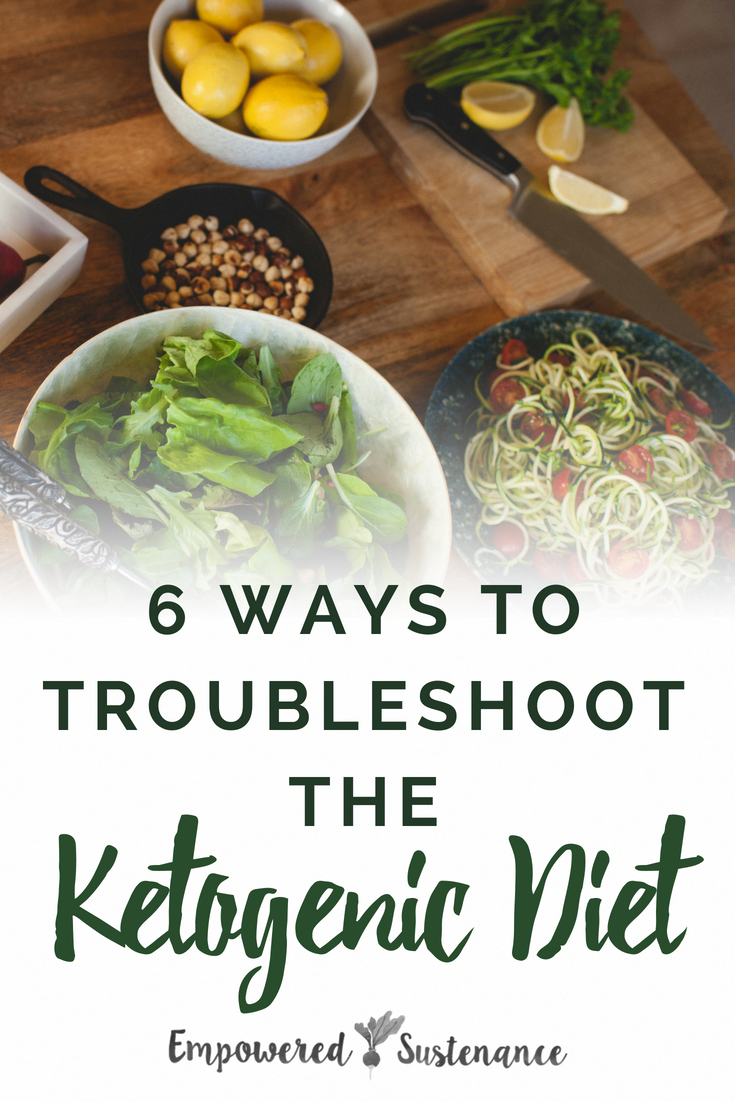