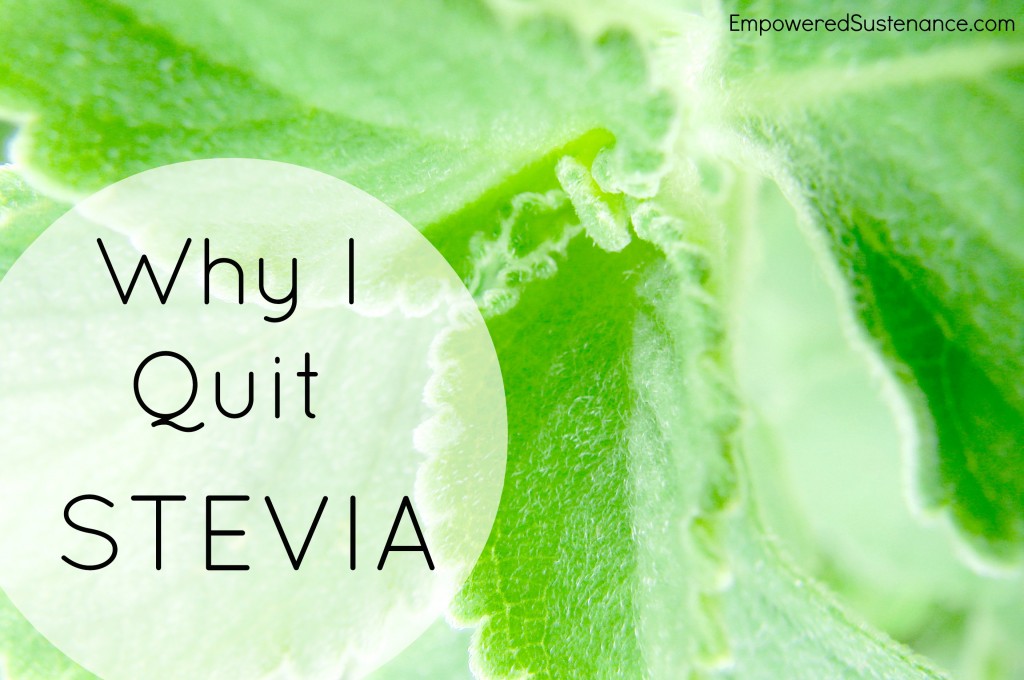 Is stevia bad for you?

As you know, the transition to real food is a journey. It doesn’t happen overnight. There are bumps in the road. It’s a learning process. One bump in my road toward healing? Stevia.

I’ll be honest… I previously used stevia with abandon, before I came to the conclusion that stevia does not support health. I added stevia to sweeten my tea and I occasionally I used it in desserts or baking, like my Coconut Flour and Stevia Zucchini Muffins.

I found that stevia was very convenient. It dissolves instantly and works well in beverages or liquids. Further, because a little goes a long way, it is less expensive than many other sweeteners. But , for me, the cons outweigh the pros, and so I have quit stevia for good.

Our bodies are not designed or evolved to handle calorie-free sweeteners – be it natural or artificial. Experiencing a sweet taste from a food that is not going to provide glucose confounds our body’s sugar-handling process. Kate, from one of my favorite health blogs Nutrition By Nature, explains how eating a sugar-free sweetener like stevia can trick the body into a state of hypoglycemia:

Stevia is “sweet” on the palate, so the body assumes it is receiving sugar and primes itself to do so. Glucose is cleared from the bloodstream and blood sugars drop, but no real sugar/glucose is provided to the body to compensate. When this happens, adrenaline and cortisol surge to mobilize sugar from other sources (liver and muscle glycogen, or protein, or body tissue) to bring blood glucose back up. (Source)

The frequent release of the stress hormones (adrenaline and cortisol) in response to the stevia-induced hypoglycemia is damaging to our adrenal glands and overall health. These stress hormones are designed to be utilized when we need to be in a flight-or-fight response–not when we are eating a meal. The consequences of excess stress hormones means a suppressed immune system, increased inflammation, and lower thyroid function… just to name a few!

Stevia isn’t going to affect everyone’s blood sugar in the same way or to the same degree. I’ve heard from more than one of my colleagues that their clients react with poor blood sugar levels to stevia. Some folks can eat stevia without a blood sugar drop, but some people will experience this blood sugar drop and correlated stress hormone surge. If you want to check, buy a glucose meter and test your blood sugar before and after eating stevia. Plus, if you are eating stevia with another source of sugar or carbohydrate the blood sugar concerns will not be as harmful, since you are providing cells with some glucose in response to the sweet taste. But blood sugar isn’t the only issue I have with this sweetener.

The issue of other additives exists because we use processed stevia, not pure stevia leaves. Obviously, if you have a pot of stevia leaves growing in your garden, you can ignore this point.

3. Stevia has an aftertaste

If you eat stevia, you know it has an aftertaste… and you do your best to convince yourself of the contrary. Raw honey (or pure maple syrup or sucanut or coconut sugar) tastes exorbitantly better. Period.

What is so wrong with the popular Candida Diet, a sugar-free diet that uses only stevia as a sweetener? I recently debunked candida myths and offered a safer, healthier alternative to the Candida Diet in my post Busted: Candida Myths. 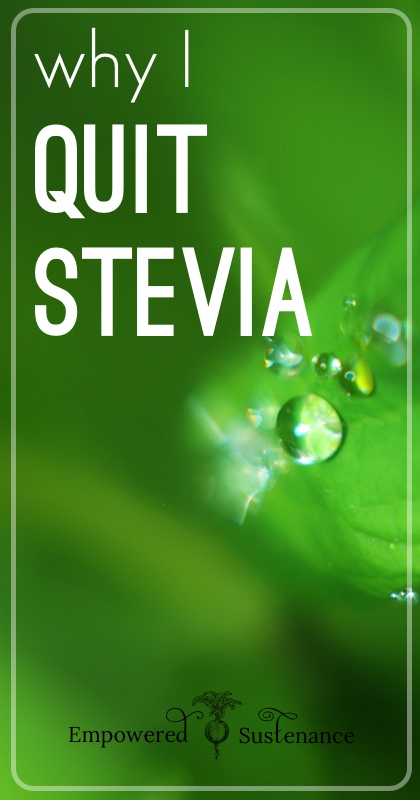 Many people choose stevia over natural sweeteners like fruit and honey, but this is not a good choice. Fruit and raw honey, in particular, are excellently balanced sources of glucose and fructose, providing the liver with building blocks to create glycogen (glucose stores). Stevia, however, does not support glycogen formation.

Why is glycogen so important? When blood sugar is low, glycogen is broken down and released as glucose in the bloodstream. When the diet lacks sufficient glucose, there will be inadequate glycogen stored. If sugar is not immediately ingested to raise blood sugar levels, the body releases extra adrenaline and cortisol to convert muscle protein and fat into glucose. If this pattern is repeated, the frequent release of these stress hormone takes a toll on the body… and one of the most manifest symptoms of excess cortisol is abdominal weight gain.

I love giving my body some fuel in the form of raw, unfiltered honey instead of nutrient-void stevia. I believe that a sugar-free diet is detrimental (and by “sugar free” I mean free of healthy sugars… there is nothing wrong with eliminating white sugar, agave nectar, and corn syrup from the diet!). See my post Sugar: Why Your Body Needs It to learn why natural sources of sugar are important to metabolism and healthy hormones.

6. Stevia molecules have a hormone structure

I’m not a scientist, but one nutrition scientist whom I greatly admire – Sarah Ballantyne – is strongly apprehensive of the hormonal structure of stevia molecules. According to Sarah,

While small and occasional consumption of stevia likely has little to no impact on general health, it should not be consumed on a regular basis especially by those with altered hormone balance and dysfunctional immune systems. (Read more)

Since I have an autoimmune disease and hormonal imbalance, I’ve given stevia the boot for good. I stick with my raw honey and whole fruits!

How do you feel about stevia? Do you love it, hate it or are you on the fence?