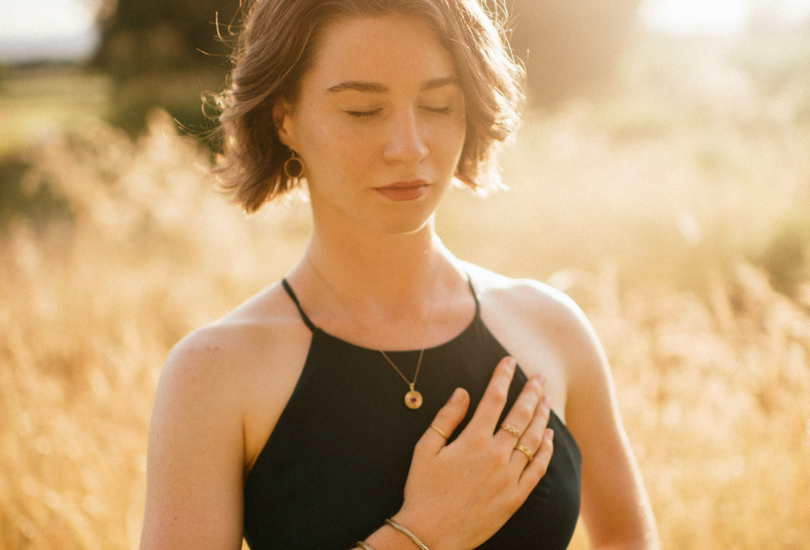 Even after I had successfully addressed my autoimmune disease, Ulcerative Colitis, with a grain-free diet, I still struggled with some ongoing health challenges. For years, I faced issues including bloating, gas, anxiety, and insomnia.

I recognized the shortcomings of Western Medicine after my colitis experience, so I didn’t turn to medication or wait in doctors offices. Instead, I plunged into the holistic health resources on the internet. I soon felt even more bloated on all the information I was trying to consume through articles, podcasts, health summits, nutrition books, and wellness conferences.

Trying to keep up the latest information further provoked my anxiety, as I was sure the answers were out there and that I was missing them. I was sure there was an organic, gluten-free, all-natural magic pill — in the form of a supplement, dietary protocol, healing technique or health gadget — that would be the missing piece.

But the more I researched, the more I felt overwhelmed with the conflicting health guidance I found.

Finally, I realized I was never going to be able to research my way to health. A piece clicked into place when I connected the stories of two well-known names in nutrition: Weston Price and Ansel Keys.

The Body’s Wisdom vs. Science

In the 1930’s, a dentist, Weston Price, traveled the globe to discover the secrets of the world’s healthiest people.

Dr. Price found that the diets traditional to each culture, although dependent on geography, had extremely similar nutrient profiles. The ancestral diets of the Inuit in Alaska to the Maori in New Zealand offered similar nutrition, even though nutrients were sourced from different foods. For example, these ancient diets were rich in minerals and contained high levels of fat soluble vitamins A, D, E, and K2.

How did these people across the globe all discover the optimal diet for the human body?

They didn’t have diet books, calorie quotas, or ways to measure nutrients. Instead, they trusted their bodies, and their bodies lead them to health.

Contrast that with the War on Saturated Fat, circa 1960 – 2000. In the 1950’s, researcher Ansel Keys proposed a causal relationship between amount of saturated fat one eats and the incidence of heart disease. He received a fanfare of publicity for his theory, and was on the cover of Time Magazine in 1961.

Although his research always faced contradictory evidence, it went largely unquestioned and became a foundational belief in the arena of nutrition. As American families ditched butter and whole milk in favor of margarine and skim milk, rates of chronic disease didn’t improve. Rather, diseases including diabetes and heart disease skyrocketed.

It’s not intuitive to give up butter on your spinach or choose a low-fat dressing on your salad because it tastes bad. Yet the American public overrode their intuitive food cravings because science told them not to trust their bodies. We cut out whole foods like butter and olive oil, replacing them with low-fat, high-sugar, highly-processed pseudo-foods.

Finally, science caught up with what our bodies have always known: we need fat, particularly saturated fat, from whole foods. Pseudo-foods like canola oil and margarine taste bad because they are bad for us. In June 2014, Time Magazine attempted to ameliorate 50 years of low-fat dogma with a cover stated, “Eat Butter. Scientists labeled fat the enemy. Why they were wrong.” 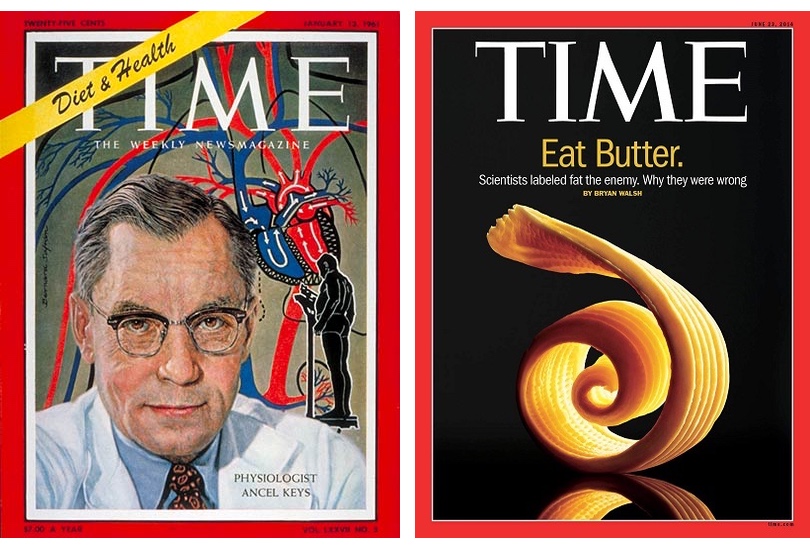 During the low-fat craze, our bodies craved fat. Saturated fat and cholesterol, from unprocessed and whole food sources, play a critical role in hormonal health, satiation, energy, and brain health. Through the increased rates of disease and hormone problems, our bodies were telling us to eat real butter, real eggs, real bacon.

The Pattern Repeats Itself

As long as we’re out of touch with our bodies’ wisdom, we’re still repeating this disastrous pattern. And it’s foolish to believe that we can trust science to guide our food choices.

While science has progressed, it’s unwise to blindly trust peer-reviewed studies with our health. Here’s why:

First, more often than not, the data from scientific institutions is financially influenced by politicians, Big Pharma, and profit-oriented universities. Consider this statement (source) from Arnold Seymour Relman, Harvard Professor of Medicine and Former Editor-in-Chief of the New England Medical Journal.

Second, as discussed by a survey published by the respected medical journal Nature, 70% of studies are not reproducible or repeatable. 52% of the scientists polled said there is a “significant crisis of reproducibility.” (Source)

I realized that science can’t show me the exact steps I must take on my healing journey. But fortunately, my body could. After all, my body holds the same wisdom that guided my ancestors to land on their optimal diet.

I simply needed to get out of my body’s way so she could heal me.

I finally realized that healing is the process of learning how to trust your inner wisdom over external authority.

Let me say that again, because it’s the main point of this whole article. Healing is the process of trusting your inner wisdom, becoming less reliant on external rules and dogma.

I was able to heal my body — and my life — more thoroughly than I ever thought possible when I learned how to trust my body. I’m healthier, more joyful, more creative, and more powerful than I’ve ever been before. Those of you who follow me on instagram have witnessed this transformation.

I healed not because I found the magic supplement or gadget. Instead, I became my own intuitive healer by trusting my body.

Intuitively heal yourself and heal others

I remembered the instance that marks the beginning of my healing journey. Nearly bedridden from my autoimmune disease, I had just dropped out of college. Because all medications had failed to control my disease, my doctors told me I would likely require a surgery to remove my large intestine.

Shortly after, a book seemed to jump off a bookshelf at me. It outlined a dietary protocol that had helped others with my disease. My doctors had always told me, “Nutrition won’t help.” Now they were saying, “Surgery is your only option.” But, as I held that book, I felt wordless words speaking to me from my core. I heard, I have to try this.

If I had continued to give someone else authority over my health, I would not be healed.

Not only that, I would not have created a blog that has helped millions of others on their healing path. And I would not be writing a book that will help countless more people heal.

You’ve got to learn how to trust your body, not only because your healing is at stake. You have to trust your body because that’s how you’re going to support other people. Your kids, your loved ones, your clients, or your students. We can only contribute meaningfully to the world to the degree we trust our bodies.

What it means to be your own intuitive healer

Here’s what happens when you become your own intuitive healer:

You find the resources required for your healing, such as practitioners, books, protocols, supplements, and healing techniques. But you recognize these are merely tools, they not the cure.

You understand that healing is much bigger than the food you’re eating and the supplements you’re taking. You begin to identify the pillars in your life, such as your relationships and work, that need to shift.

You gain the courage to shift those aspects of your life, even though they are often much harder to change than changing your diet or buying another health gadget.

You recognize the historical and cultural forces at work to undermine your intuition. When you understand how your healing intuition has been culturally hijacked, then you can fully reclaim our intuition.

You’re brave enough to take one intuitive step after the other on your healing journey, even though you don’t know where the path leads.

You know that you are trustworthy. You begin to trust yourself with your life. And that’s when your life becomes magnificent.

How To Trust Your Body Program

If you want to become your own intuitive healer, my 4-week How To Trust Your Body program is a fit for you.

In this program, you’ll learn how to access your intuition so you can make better decisions in your health, relationships, and work.

You’ll also learn from me and four guest instructors, who are all my personal practitioners and experts in their fields. Private sessions with these instructors costs $150 – $250 per hour, so this program offers an affordable way to experience their healing work.

ENROLLMENT IS PRESENTLY CLOSED. If you’re interested in taking the program later this year, sign up for my free video series below. You’ll learn three truths your body is longing to tell you.

If you’re ready to listen, these truths can heal your life. 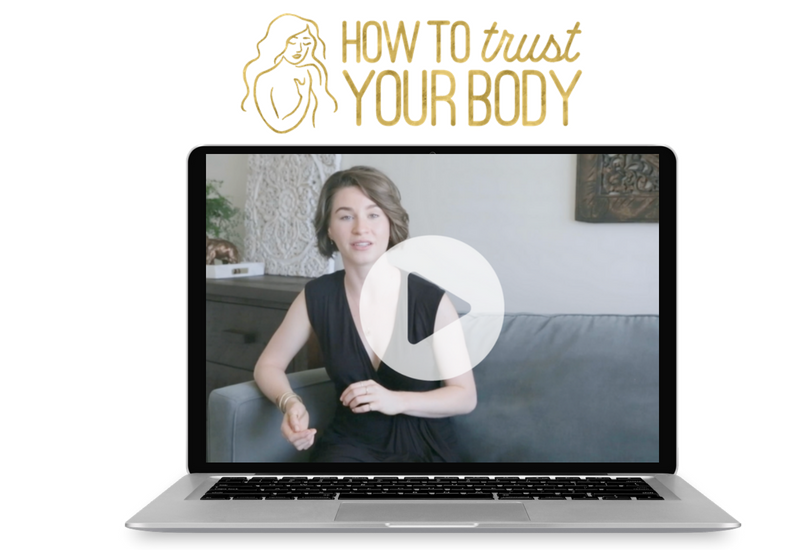 I look forward to helping you become your own intuitive healer!