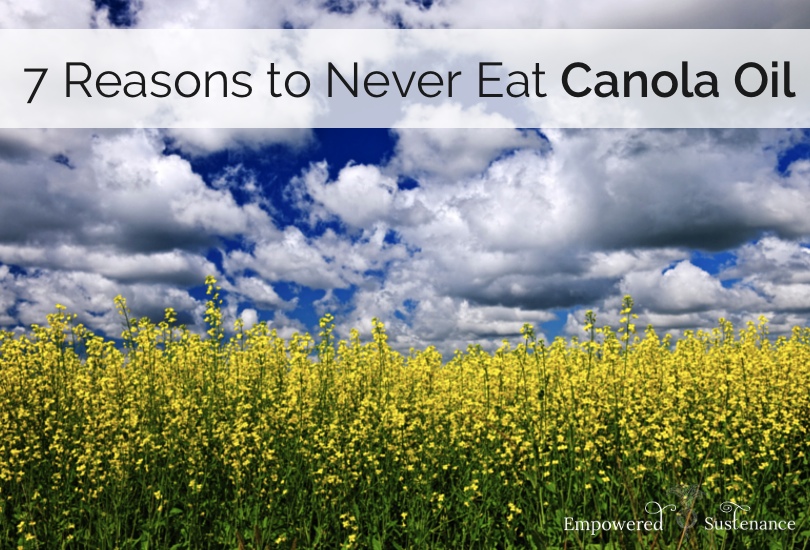 Have you ever read the ingredient list on  the bakery items, salad bars, and hot food bars in Whole Foods? You’ll find nearly everything is prepared with canola oil. Since canola oil is anything but a whole food, it is time for Whole Foods to show concern for the health of their customers and remove canola oil from their in-store prepared foods.

If you peruse the aisles of your local health food store – be it a Whole Foods, Trader Joe’s or an alternative – you will likely find canola oil listed as an ingredient in many of the freshly prepared as well as packaged foods. The sad truth is that these companies persist in using canola oil because it is cheap, not because it is healthy.

Here are 7 reasons why health food companies, including Whole Foods, should ditch the canola oil immediately.

1. Canola oil is a freak of nature

You can watch the process of how canola oil is made in this 3-minute video, but I’ve summed up the steps for you below. You won’t believe that the narrator begins the clip by saying, “canola oil is one of the healthiest cooking oils.”

In conclusion, canola oil reaches your grocery store shelves after a refining process that includes chemical solvents, lye, high pressure, and high heat. The by-products of canola oil include animal feed (not anything that I would feed to my animals!), soap-making materials, and wax used to make toxic hydrogenated vegetable shortening.

If that’s not enough to scare anyone away from canola oil, I don’t know what is! Sadly, many individuals and companies still fall for the marketing claims by the food industry regarding canola oil. It’s time to debunk those marketing claims!

2. Canola oil is not heart-healthy

Many consumers believe that since canola oil is low in saturated fat, it is a healthy choice. It is no coincidence, however, that obesity and heart-disease rates skyrocketed when Americans began replacing old-fashioned fats like butter with processed vegetable oils like canola oil. Now, we have the studies to show that vegetable oils may contribute to disease while saturated fat intake does not.

In 2010, a meta-analysis of over 300,000 people in the American Journal of Clinical Nutrition shows that there is no evidence that saturated fat causes heart disease. A Japanese study followed nearly 60,00 men for 14 years and found that saturated fat intake had no correlation to rates of heart disease. However, numerous studies show that the consumption of vegetable oils, such as canola oil, increase the risk of heart disease. According to one of my favorite health researchers, Kris Gunnars of Authority Nutrition:

Multiple randomized controlled trials have examined the effects that vegetable oils can have on cardiovascular disease. 3 studies have found a drastically increased risk (17, 18, 19), while 4 found no statistically significant effect (20, 21, 22, 23)  (Source and read more)

3. Canola oil may lower cholesterol, but that doesn’t make it healthy

Again, according to Kris Gunnars in his article on canola oil (emphasis mine):

We have several controlled trials where researchers feed people with canola oil, then observe what happens to blood markers like cholesterol. In these studies, canola oil lowers total cholesterol, LDL cholesterol and triglyceride levels by up to 25%. It has very little effects on HDL levels (12, 13, 14, 15, 16, 17).

However, these studies are very short in duration (longest is 4 months, but most are 3-4 weeks), which is too short to determine anything about heart disease itself. It’s important to realize that cholesterol levels are a risk factor, not necessarily a cause of disease. To know if something really prevents heart disease, then we need to measure heart disease itself, not just a blood marker that is associated with it. Other studies that spanned a number of years have shown that even though vegetable oils lower cholesterol in the short term, they can increase heart disease risk in the long term (18, 19).

In other words, just because studies show that canola oil may lower cholesterol doesn’t make canola oil healthy – far from it!

Mary Enig, author of Know Your Fats, offers an explanation of why the cholesterol-lowering effect of canola oil may actually be dangerous in her article The Oiling of America:

4. Canola oil is not neutral flavored

Whole Foods says that canola oil is “very versatile, has neutral flavor and is fairly heat stable.” The oil of the canola seed is not inherently neutral-flavored, nor is it naturally free from odor. The colorless, flavorless and odorless properties are the result of the extremely unnatural refining process and numerous chemicals.

5. Canola oil is not high in omega-3 fatty acids

Contrary to popular belief, canola oil is not a source of omega-3 fatty acids. While the unprocessed oil of the canola plant does contain some omega-3, the high-heat processing denatures this delicate, heat-sensitive fatty acid. As a result, the omega-3 is rancid and unavailable to fight inflammation in the body. The processing of canola oil even turns the omega-3 into trans fat! According to author Dee McCaffrey in The Science of Skinny,

The deodorization process converts a large portion of the healthy omega-3 fats into very unhealthy trans fats. […] Although the Canadian government lists the trans content of canola at a minimal 0.2 percent, research at the University of Florida at Gainesville, found trans levels as high as 4.6 percent in commercial liquid oil. The consumer has no clue about the presence of trans fatty acids in canola oil because they are not listed on the label. 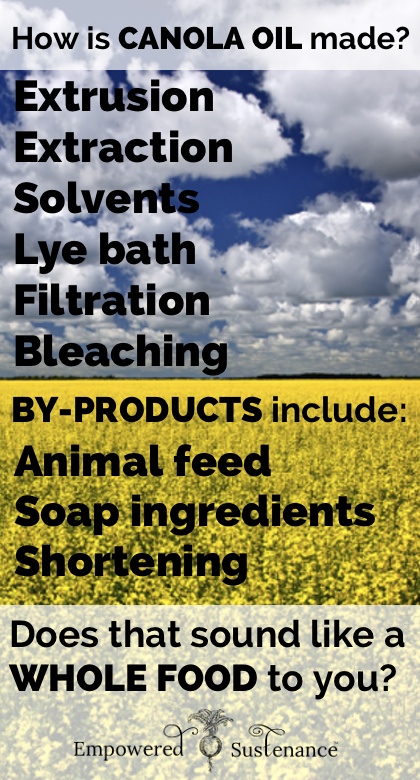 6. Canola oil is not a heat-stable fat

According to Mary Enig, PhD and author of Know Your Fats, the more hydrogen atoms in a fatty acid, the more heat-stable it is. Saturated fats, such as butter and coconut oil, are fully saturated with hydrogen atoms and are therefore the most heat stable. They will not oxidize (become rancid) during cooking. Polyunsaturated fats are the least saturated with hydrogen, and will therefore easily oxidize with heat. Monounsaturated fats such as olive and avocado oil are relatively heat-stable and are a much safer option than canola oil for cooking (source).

7. There are healthier oils to use instead

The non-allergenic status of canola oil is not an excuse to continue the use of this non-food in “health foods.” Olive oil, avocado oil and coconut oil are extremely healthful, non-allergenic and very versatile.

There is much misunderstanding about coconut and tree nut allergies. The American College of Allergy, Asthma & Immunology (ACAAI) states: “Coconut is not a botanical nut; it is classified as a fruit, even though the Food and Drug Administration recognizes coconut as a tree nut. While allergic reactions to coconut have been documented, most people who are allergic to tree nuts can safely eat coconut. If you are allergic to tree nuts, talk to your allergist before adding coconut to your diet.”

Do you wish you could eat from the salad bar at Whole Foods without a dose of canola oil? So do I! Here are two quick and easy ways to shoot Whole Foods the message:

Use the Whole Foods Contact Form here. Beneath the Contact Us Via Email heading, select the option Quality Standards then paste this message into the form:

Please prioritize the health of your customers and use healthy oil options like olive oil, avocado oil and coconut oil instead of canola oil: http://empoweredsustenance.com/canola