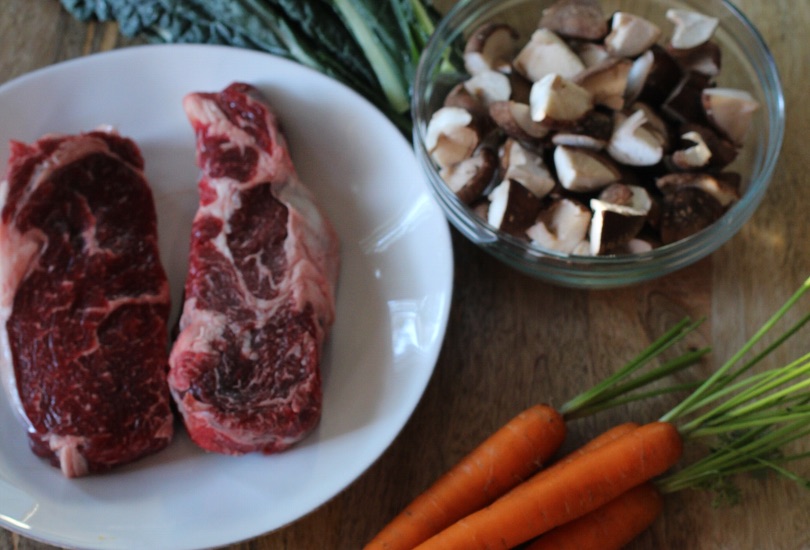 1. Grassfed Beef is a Source of CLA

CLA – Conjugated Linoleic Acid – is a fatty acid synthesized by cows when the graze on pasture. This nutrient is present in the meat and milk of grassfed cows.

CLA boasts anti-carcinogenic qualities, and numerous studies show that CLA inhibits the growth of breast cancer. Supplementation with CLA has also been shown to cause fat loss and improved body composition in humans (source). I believe a nutrient from a whole-food source – in this case, CLA in grassfed beef – is more effective than a supplement due to being paired with naturally-occurring cofactors. Further, the fat and protein content of grassfed beef plays an essential role in weight loss due to satiation quality.

Another benefit of grassfed beef? Better nutrition, not just for us, but for the soil. There’s no doubt that humans have mauled our delicate ecosystem, but the good news is that holistic livestock management can not only prevent further damage, but can repair damage.

It all comes down to poop. As Liz Wolf writes in one of my favorite wellness books,

Ruminants like cows and bison are made to eat grass, not corn, soy or candy wrappers, and they’re made to live on pasture and rangeland. They’re supposed to poop non-toxic meadow muffins, which they then stomp into the grass, returning nutrients to the soil.

Allan Savory, president of the Savory Institute, preaches the message of holistic management for the restoration of our world’s grasslands. He recently gave a stellar TedTalk called How To Re-Green The World’s Deserts and Reverse Climate Change.

According to a recent study on the role of animals in soil fertility, grass-grazing animals and sea mammals are an essential “distribution pump” to inoculate and disperse nutrients in the soil. Researchers recommended restoring herds of wild grass-grazing animals, such as bison, as well as transitioning from confined cattle to grassfed cattle.

Everyone knows omega 3 is a beneficial fatty acid that reduces inflammation. But do you know how it is anti-inflammatory? 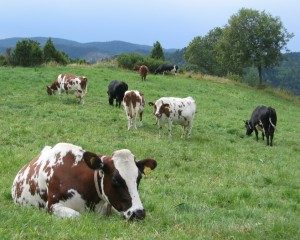 In a nutshell, both omega 3 and omega 6 are required for wellbeing, since our body relies on the ability to both inflame and anti-inflame. Too much omega 6 and a deficiency in omega 3, however, contributes to systemic inflammation. While our hunter-gatherer ancestors consumed roughly a 1:1 ratio of omega 6 to omega 3, researchers estimate that today we consume an average ratio of 20:1. (Source.)

Research shows that grassfed beef boasts significantly higher levels of omega-3 (source, source). Grassfed beef has a healthy omega-6 to omega-3 ratio of 1.5:1, while grain-fed beef is heavier on the side of omega-6 with a ratio of 7:1.

4. Grassfed beef is higher in antioxidants

“You are what you eat” applies to cows, as well. Cattle consuming antioxidant-rich vegetation, in contrast to grains, produce beef with higher levels of these antioxidants:

Grassfed beef tastes like beef. It is a full experience of beef – the experience of the air, grass and sunshine that nourished the animal. Poor quality, grain-fed beef lacks the dimension and flavor.

Grain-fed beef doesn’t taste like beef because it can’t. Cattle must eat what they were designed to eat in order to create a true experience of beef.

How can grassfed beef can change the world?

In a debate on Intelligence Squared, trail-blazing “beyond-organic” farmer Joel Stalatin argued that meat should be more expensive. Why? Because high quality meat comes with higher price. He believes we should eat less meat, but of a better quality.

Every dollar you spend on beef can supports your family’s health, the restoration of our environment, and an meal experience that connects you to the life-giving rhythm of sun-grass-animal. That is an opportunity to change the world.

The World Health Organization peppered international headlines when it recently categorized cured and processed meats as Group 1 Carcinogens – in the same group as tobacco! It also declared fresh red meat as “probably carcinogenic.” But hold your horses, there is no need to throw your grassfed meat out with the bath water.

In a meta-analysis of 35 studies examining the correlation between red meat and cancer, the association between the two were very weak and statistically insignificant in many cases. (Read more about the study here.)

The observational studies used to research the effects of red meat consumption on cancer lack controls over other variables. Further, these studies only show correlation, not causation. And there can be other highly problematic correlations between variables which are not considered.

For example, the vast majority most Americans consume red meat in the form of fast food burgers, with a side of fries, bread, and likely a milkshake. Where is the study showing the correlation between fry intake and cancer?

It follows that someone consuming highly processed, low-quality red meat practices poor lifestyle choices (such as exercise avoidance and a low consumption of fresh vegetables). A study considering red meat and cancer should control variables such as the quality of the meat and the lifestyle of the participants.

Ever since humanity first encountered the cow, grassfed beef has nourished humanity. Choosing grassfed over industrialized beef means that you are voting to repair and protect the wellbeing of our ecosystem.