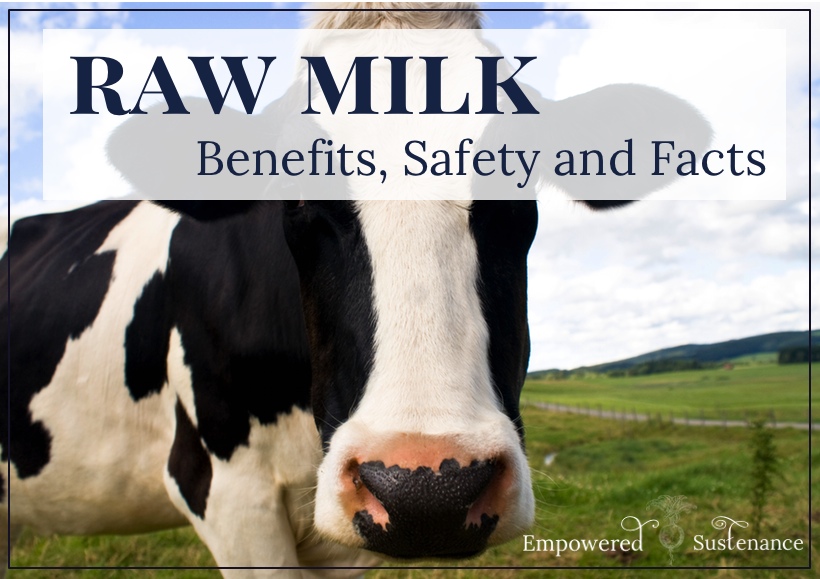 What makes raw milk so special?

“What’s the big deal with raw milk? What makes it so special?” you may wonder. Well, when it comes to comparing raw milk and regular (a.k.a. pasteurized milk), they are two entirely different substances. Raw milk is a living food, full of digestion-enhancing enzymes. Pasteurized milk, on the other hand, is a dead food that is highly allergenic and difficult to tolerate. 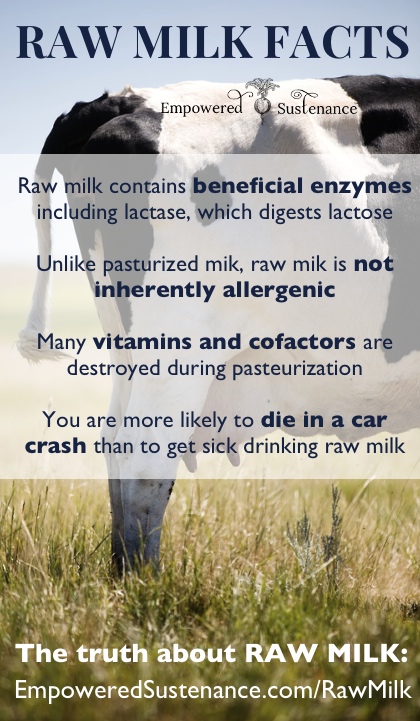 In particular, raw milk contains the enzyme lactase which helps breakdown lactose. Additionally, an enzyme in the butterfat called lipase aids in fat digestion and assimilation of the fat-soluble vitamins.

Pasteurized milk is heated to 170 degrees and ultra-pasteurized milk is heated to 280 degrees. This prolongs the shelf-life of the milk at the cost of destroying the health-giving qualities of the milk. There are no live enzymes left in pasteurized milk… it is a dead food. As a result, the digestive system must furnish all the enzymes required to digest it. Often, if the diet consists of all cooked foods, the body’s enzymes stores are depleted and digestion is impaired.

The butterfat in raw milk separates to the top… just like butterfat should. The butterfat is primarily saturated–the most healthiest and most stable fat to consume (if you are still stuck in the utterly false mindset that saturated fat is bad for you, then get thee a copy of Nourishing Traditions immediately!). If the raw milk is from cows in pasture, this butterfat boasts anti-inflammatory and anti-carcinogenic properties.

The practice of homogenization further mutilates the chemical integrity of milk. The fat globules are pressurized so that they become small enough to be in suspension throughout the milk, without separating into cream. This makes the fat and cholesterol more susceptible to rancidity and destroys the colloidal structure of the milk.

Even worse options are reduced fat, low fat and skim milk. The body requires removed butterfat to absorb the fat-soluble vitamins A, D, E and K in the milk. This vitamins are even more unavailable to the body in low fat/skim milk. Skim milks often contain dry milk powders and additives to compensate for the loss of flavor and texture with the butterfat. The consumption of skim and 1% milk has been shown to cause more weight gain than whole milk (here’s the study).

The vitamins in raw milk are fully intact and bioavailable. If the cows are in pasture, the milk is significantly higher in the extremely beneficial vitamin K2. This vitamin was studied by Dr. Weston A. Price, who understood its powerful health-boosting properties and called it Activator X.

One survey revealed that 80% of people who were described as “lactose intolerant” by a healthcare practitioner can consume raw milk without a problem. Raw milk is heralded as a cure for asthma, thyroid disorders, constipation, allergies and more.

Pasteurization and homogenization makes milk allergenic and difficult to digest. In particular, pasteurization destroys the naturally-occuring lactase enzyme. This often leads to undigested milk sugar (lactose), which can can cause digestive distress. Further, the heat of pasteurization denatures and destroys some proteins. I think that one reason people find raw milk so much easier to digest is because the proteins are complete and bioavailable.

5. Raw milk is not inherently allergenic

While dairy allergies are pervasive in Western nations, raw milk consumption has been correlated to lower rates of allergies. Although correlation doesn’t mean causation in that study, many folks who have switched to raw milk will tell you that it drastically reduced their seasonal allergies, hayfever and asthma.

As a matter of fact, early exposure to a farm environment and “farm milk” (another term for raw milk) showed protective properties against allergies and asthma.

According to the study published in the Lancet,

Exposure of children younger than 1 year, compared with those aged 1-5 years, to stables and consumption of farm milk was associated with lower frequencies of asthma […], hay fever […], and atopic sensitisation […].

Pasteurized milk, though, is a very common allergen and many natural health practitioners from various modalities believe it is inherently allergenic. As a matter of fact, pasteurized milk can actually precipitate food allergies, because pasteurization alters some of the milk proteins and makes it irritating to the gut.

Generally, raw milk is obtained from smaller-scale local farms. Chat with the milk producer and support the farmers who let the cows graze in pasture. Pastured, rather than grain and soy fed cows, boast drastically more nutrient-dense milk. Additionally, pastured cows and cattle restore the top soil and play a vital role in the ecosystem. 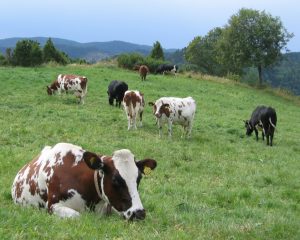 Cows at gigantic-scale dairy farms live in cramped, unsanitary conditions. They produce unnatural quantities of milk, causing their udders to distend and impairing their ability to walk. These cows are fed corn and soy, ingredients that their ruminant digestive system was not designed to handle. Large amounts of antibiotics are required to keep the cows alive, and traces of these antibiotics pass into the milk. The treatment of these milk cows is extraordinarily cruel… these gentle creatures are treated like machines, not animals. The milk they produce is of extremely poor nutritional quality due to their living conditions but also (I believe) to the emotional distress they endure.

One common concern regards the safety of raw milk. “Is raw milk safe?” is the first question I’m asked when I explain that I happily drink raw milk. Any food can be contaminated with a dangerous bacteria or pathogen… that is the risk of eating anything. The “dangers” of raw milk are exceptionally exaggerated, however. For example, it is 10 times more likely to get sick from eating deli meat than consuming raw milk (on a per-serving basis!). Source.

Last year, Chris Kresser wrote a comprehensive and flawlessly executed article on the safety of raw milk. In response to the cherry-picked CDC press release that claimed “Majority of dairy-related disease outbreaks linked to raw milk,” Chris brought the risks of raw milk into perspective:

Many states restrict the sale of raw milk in grocery stores. Other states allow herdshares or the sale of raw milk if it is labeled as pet foods. Even in the few states that completely outlaw raw milk sales, it is almost always possible to purchase raw milk from a farmer. To find raw milk in your area, contact your local Weston A. Price Foundation chapter or the Real Milk website.

If you cannot find raw milk, the second best option is low temperature pasteurized and non-homogenized milk. Seek out sources of milk from pastured cows, since this will be higher in nutrients. Try to avoid Ultra High Temperature (UTH) pasteurized milk, a highly denatured product. Interestingly, the major Certified Organic dairies like Organic Valley use this type of processing.

This is another question that I wanted to address here, since it pops up so frequently on my (and other bloggers) Facebook page. Let me preface this by saying: I am not trying to convince you that you should drink milk. You can make that decision for yourself. But I do believe the “cow milk is for cows” argument is illogical, and here is why:

2. Animals innately know the nutrient-dense qualities of fresh milk, and that is why they would drink cow milk if only they could! Dawn at Small Footprint Family has a well-researched rebuttal for the argument that humans are the only species that drink the milk of another animal:

“Many mammals drink other mammals milk. For instance, pigs are notorious for breaking into the dairy barn just to drink from the cows. Some animals also sometimes nurse orphan animals of other species. Primates love cow’s milk and ask for it from their handlers. Raccoons prefer it when dumpster diving/scrounging around in cities. The Red Billed Oxpecker perches on the udders of Impala and drinks their milk. On Isla de Guadalupe, feral cats, seagulls, and sheathbills regularly steal the milk directly from the teats of elephant seals. Predators in African savannahs fight viciously over the full udders of the nursing animals they’ve hunted down. Most animals would gladly consume milk if you gave it to them; they just lack the access, brain power, and opposable thumb to get it. ”

“But I can’t tolerate milk products!”

“But I can’t eat dairy. It gives me digestive issues.” Most likely, you will be able to tolerate raw milk without a problem, even if you have lactose intolerance. Cheeses are more difficult to digest, however. If there is an actual cow milk allergy, however, raw goat milk makes an excellent substitute and is even better tolerated than raw cow milk. Homemade yogurt, especially made from raw milk or raw goat milk, boasts even superior digestibility.

Are you a raw milk fan? Do  have easy access to it, or do you need to purchase it straight from the farmer like me?

Additional sources not linked in the above text: Real Milk Website, Nourishing Traditions